#LetDuteeRun
Thank you! We Did it!
Read the Release

Until now, the regulation invertir en traders has caused female athletes with naturally-elevated testosterone levels to be suspended or to be banned outright from competition unless they underwent medical intervention to lower their testosterone levels.

In what will be widely considered a major victory for the rights of athletes, women may now compete regardless of their natural testosterone levels and without being subjected to invasive screening or medical intervention.

Ms. Chand said she is relieved and delighted that she can continue to pursue her dream as an athlete in international women’s track and field competitions.

“What I had to face last year was not fair. I have a right to run and compete. But that right was taken away from me. I was humiliated for something that I can’t be blamed for. I am glad that no other female athlete will have to face what I have faced, thanks to this verdict.”

In its 162-page ruling, a three-member panel of the CAS chaired by the Honourable Justice Annabelle Claire Bennett (Federal Court of Australia) held that the IAAF did not establish that the Hyperandrogenism Regulation is necessary for fair competition.

Toronto-based lawyer James Bunting of Davies Ward Phillips and Vineberg LLP, who brought the pro-bono case to the CAS on behalf of Ms. Chand, noted that “the decision should have far reaching consequences around the globe as numerous other sports organizations have adopted the same, or similar, hyperandrogenism policies, including the International Olympic Committee (IOC).”

After having been barred from competing against women broker online argentina because her natural testosterone levels were too high. The CAS has given the IAAF two years to present convincing scientific evidence establishing that naturally high testosterone levels provide an unfair athletic advantage to hyperandrogenic female athletes as compared to their peers. If the IAAF does not, or cannot, do so the Hyperandrogenism Regulation will be rendered null and void.

Added Ms. Chand: “I am grateful to Dr. Payoshni Mitra, Professor Bruce Kidd (University of Toronto) and Dr. Katrina Karkazis (Stanford University) who came to my aid when I was first suspended, and to the Ministry of Youth Affairs and Sports, Government of India as well as Sports Authority of India, including its former Director General Jiji Thomson, for its support.”

Tweet NOW to show your support
Imagine...
Working towards something your whole life only to have it snapped away at the finish line. For Dutee Chand, having high natural testosterone could require her to submit to serious medical intervention to lower it because of claims of unfair advantage, or forego her career and dream.
Show More
Who is Dutee Chand?

In July 2014, Dutee learned through media reports she was ineligible for competition in the 2014 Commonwealth Games in Glasgow under an International Association of Athletics Federations (IAAF) policy that claims her natural testosterone levels are too high and give her unfair advantage. She is no longer allowed to compete in national and international competitions.

Dutee is the most recent in a string of women athletes who have had to  submit to serious medical interventions to lower their natural testosterone levels or forego their career. Dutee is the first athlete affected by this policy to challenge it before the International Court of Arbitration for Sport.

Dutee was born in 1996 to Chakradhar and Akhuji Chand in Chakagopalpur in the state of Odisha, India. She is one of six siblings. Dutee credits her elder sister as her source for inspiration; at the age of four, she began following her to workouts at the local track. By the age of ten, she was training in India’s National program.

It’s Time to do the Right thing and Stand up for Women Athletes.
“I feel it is wrong to change your body for sport participation. I’m not changing for anyone. It is like in some societies where they used forex plataforma en linea to cut off the hand of people caught stealing. I feel like this is the same kind of primitive, unethical rule. It goes too far.” - Dutee Chand
This is just another opportunity for women to be scrutinized and forced to adhere to a standard of femininity that is unrealistic and inaccurate.

Marion Irwin, Ireland
Women are women irrespective of their natural testosterone level. It's not like Dutee's cheating and she shouldn't be discriminated against because of the way nature made her.

Tony Briffa, Australia
The fact that this policy only pertains to women athletes that have trained as women and competed as women their entire lives makes it discriminatory and even abusive.

Helen Carroll, United States
Dutee should get the opportunity to run….the basic Olympic values are equality, fairplay and sports without any kind of discrimination.

“It has taken a lot of courage for Chand to stand up for herself; other athletes with her condition have quietly consented to surgery or left sports altogether. But Chand says she is willing to handle the scrutiny that has come with her public stand.”
Share this Storyor read the full article

“The sports officials who make these rules have no idea who they are stopping from competing,” said Payoshni Mitra [a researcher and activist on gender and sport]. “Many of these women are providing for their families. Sports gave them so much, so many opportunities.”
Share this Storyor read the full article

“Olympic sports have chosen to set a limit on testosterone to distinguish the two. Unfortunately, that standard leaves a woman like Chand on the outside looking in.”
Share this Storyor read the full article

“Chand's case has attracted worldwide attention, with numerous experts claiming the IAAF's "hyperandrogenism regulations" are unfair and unscientific…”
Share this Storyor read the full article
Show your support.
Sign the Petition Now
Join thousands who have already signed their name in support of Dutee
and then spread the word...
Share on Facebook
Tweet #LetDuteeRun
Share The Petition 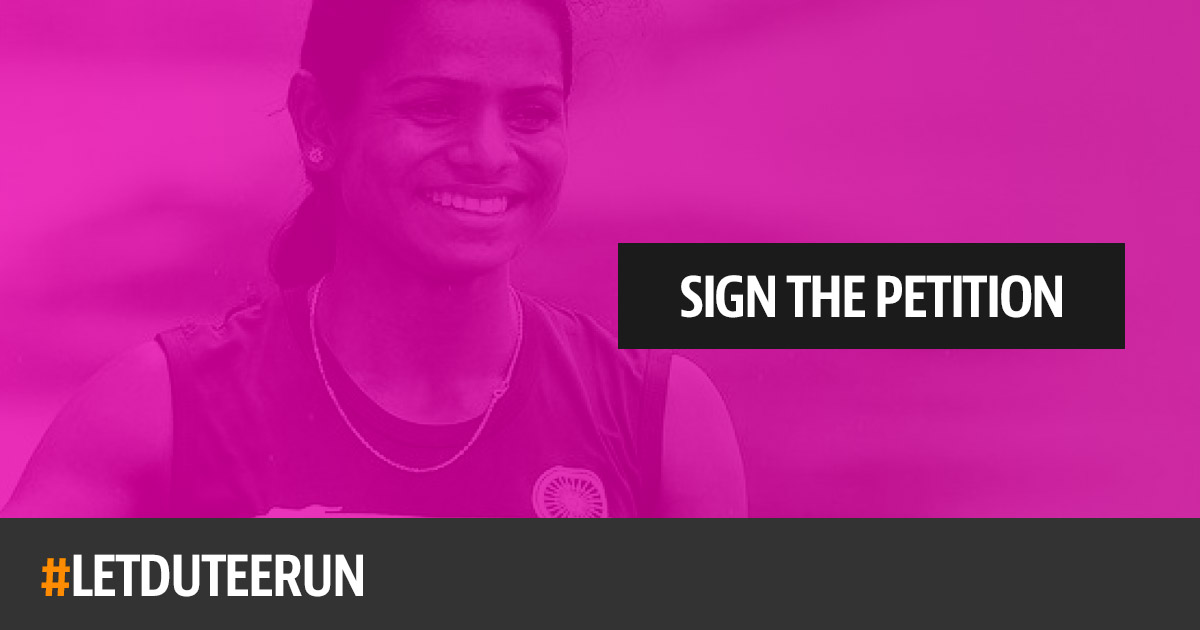